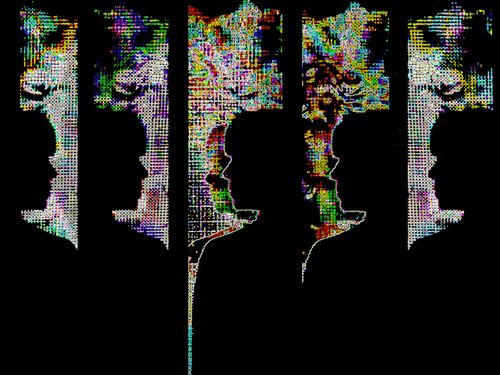 My Truth Effect series examines our ever-increasing reliance on the internet for information and social engagement and explores digital identity, including the creation of avatars to represent the digital self. It also responds to the deep divisions in the US caused by conspiracy theories and disinformation. Fueled by the digital world, alternate realities are so pervasive that countless families have been fractured by them. I am reminded of Plato’s Allegory of the Cave and the Matrix where separating what is real from what is illusory is key to achieving peace and unity.

The collages are created with my own photographs and include shadow self-portraits that capture some of the collective anxiety felt during the pandemic. The color palette is inspired by auras which are believed to be the unseen energy field around all living beings.

Scientific studies show that disinformation on the internet spreads faster and wider than the truth but I am hopeful that truth will prevail. The Illusory Truth Effect is the tendency to believe false information to be correct after repeated exposure. Researchers state that critical thinking, fact-checking, and forewarning people about how the Truth Effect is used to manipulate audiences can reduce its power.

The photographs in my Stay-at-Home Order series were taken at our suburban home in Colorado during the COVID-19 Stay-at-Home and Safer-at-Home orders issued by our Governor. My eight-year-old daughter Sophie is an only child so I encouraged imaginative play to fill her social void. Taking photos iwas a way for us to work together on a creative endeavor and for her to learn about photography. The images also display the march of time through subtle changes in Sophie as she grows up during the pandemic.

The photographs reflect some of the angst felt during this historic time but also offer brief escapes from reality through creativity and imagination. Trees are a common theme throughout the series and symbolize growth, endurance, and strength. They also show the passage of time through the changing seasons.

My American Mosaic portrait series celebrates America’s rich multicultural heritage and traditions. The ‘melting pot’ metaphor is being replaced by new metaphors like ‘mosaic’ which suggests an integration that blends yet preserves each culture’s unique qualities rather than promoting one homogenous culture. The photographs illustrate the beauty of a diverse society and explore identity and self-expression.

I have attended many multicultural celebrations and festivals in Colorado over the last five years to find the individuals in this series, all of whom are proudly wearing their own traditional dress. It has been an amazing photographic journey that has enabled me to meet so many remarkable people whose ancestry spans the globe. All the photos in this series were taken on location at the celebrations and then digitally processed afterward for cohesiveness.

My goals for the project are to help preserve ancient traditions passed down through the generations and to encourage cross-cultural understanding, intercultural dialogue, and harmony.

My aerial photographs in my Crop Circles series explore human impact on the environment and encourage innovation through creativity. I have used collage techniques to found images of mysterious crop circles that symbolize a connection to the cosmos and foster an examination of our place and significance in the universe.

The color pallet was inspired by images produced by a NASA satellite instrument used in crop forecasting by predicting air and soil conditions. Sixty years of intensive farming practices using pivot-center irrigation crop circles have depleted parts of the Ogallala Aquifer causing once-fertile lands to turn arid. New farming innovation that also restores Earth's critical imbalances is crucial to ensure a healthy planet. There has been an astonishing amount of technological and scientific progress over the past century but the need to evolve in harmony with nature is key to our survival.

My 'NYC Days' series was photographed during the years I lived in Manhattan from 2000-2011 and captures a whimsical side of the Big Apple. There is a strong focus on the elements of art such as color, line, shape, and texture. Some images also challenge perception through fragmentation or reflections. The work was inspired by many legendary New York City photographers including Saul Leiter, Lee Friedlander, and Lisette Model.

With the city as my backdrop, I photographed performers, street scenes, and events throughout the five boroughs. The photographs reveal the creativity, energy, and occasionally, the absurdity of my New York City encounters.

My Days Gone By series travels back in time to the early days of American history. From the perseverance and courage of pioneers to the legends and misdeeds of cowboys and Indians, these images explore the old anew as a way to remember, honor, and learn from our nation's past.

In pursuit of liberty, and driven in varying degrees by enterprises, desperation, and Manifest Destiny, the early settlers demonstrated immense grit and determination. These traits are particularly vivid in the West, even today. Yet for every storied myth, there is an evocation of hidden tragedy; one cannot view one without sensing the other. Such is America's history and legacy- a reminder of who we are as a nation, where we have come from, and where we may yet go.

My Eclectic Nation series celebrates multiculturalism in America and honors its eclectic mix of people and their heritage. The series documents myriad cultural traditions at festivals in and around my community and illustrates the rich blend of traditional dress, dance, and rituals in America.

I have spent over a decade photographing and experiencing different cultures. I have great admiration for the beautiful traditional fabrics and ways people adorn themselves, which stems from my textile design degree. My goals for the project are to show the beauty of diversity in America and to inspire empathy and cross-cultural understanding.

My Sublime Mysteries series explores spirituality and mysticism across different cultures. The images examine how individuals attempt to unravel the mysteries of life by connecting with a higher consciousness.

The reportage images focus on religious rituals and idols, spiritual customs, and mystical places. The collage images, created from my photographs, are inspired by legends and mythologies about creation, life, and the afterlife. In all the images, I attempt to capture some of the mystery, wonder, and awe of spirituality.

My When West Meets East series documents my travels to India to meet my husband’s family and to learn more about his culture. My first visit to this wondrous country was to attend our wedding reception in Kolkata. We returned seven years later with our daughter Sophie and introduced her to many ancient Indian traditions and customs. I photographed both private moments with family as well as public interactions with those I encountered in my travels. With over a billion people, India is the second-most populous country in the world. My images reflect the frenetic pace of urban life in India as well as much-needed retreats to more tranquil environments. As the world’s largest democracy and with its rising economic influence, India has become an influential regional and global power. However, it continues to struggle with huge economic and environmental issues as it attempts to modernize. My images observe the myriad dichotomies - opulence and poverty, ancient and modern, spiritualism and consumerism - that exist side by side in this mystical country.

My photos capture a sense of wonder and intrigue of the exotic and unfamiliar but also document universal themes of love, joy, sadness, and struggle. My goals for the project were to broaden my understanding of my husband’s culture and therefore of him. Ultimately this is a story about love, acceptance, and the enriching experience of marrying into an Indian family.